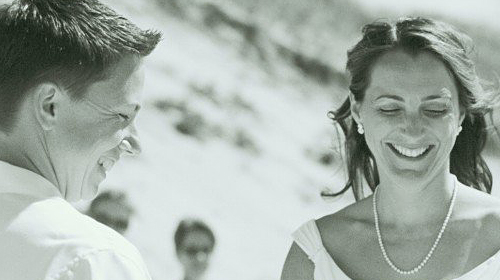 Together 10 years and wed in Massachusetts, where they used to live, Heather, 44, and Kath, 41, reluctantly gave up the legal protections of marriage when they moved to Pennsylvania in 2007 after Heather was offered a job here. Since then they’ve put down roots, starting up a roller derby league and settling down on the edge of town in Downingtown with three rescue dogs, two cats, and seven chickens.

Because they are not recognized as spouses in Pennsylvania, they feel vulnerable and worry about what could happen in times of crisis because they are no longer automatically legally authorized to make medical decisions for the other if necessary. Instead, with each trip to the hospital or doctor, they have had to explain their relationship and prove it with paperwork. The couple has also has to pay more for health insurance because spousal coverage is no longer available to them, and they have experienced complications related to their mortgage and paying taxes because people don’t know whether to treat them as married or unmarried.

The emotional toll of not having their marriage recognized in Pennsylvania has been especially difficult for Heather and Kath. Kath said, “Friends would ask me if I felt different once we were married, and it always surprised them when I said ‘Yes, I feel 100 percent different!’ There’s a sense of security, a knowledge that this is where you fit. Marriage means something.” To that Heather added, “On the day we got married it felt like the last piece of the puzzle had fallen into place.” To have the state they love and now call home essentially annul their marriage is painful. “It hurts to have to tell people we’re not considered married here.”