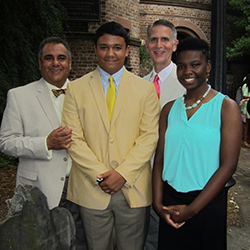 Greg Bourke and Michael DeLeon have been together since 1981 and are raising two children. They live in Louisville. The couple was married in 2004 in a ceremony overlooking Niagara Falls but continue to fight for legal recognition in their home state.

Because of Kentucky’s discriminatory marriage law, Greg and Michael’s children each have only one legal parent and only Michael’s name is listed on their children’s birth certificates. Even though they have drawn up medical powers of attorney and other legal documents, they do not enjoy the legal protections and emotional security that comes with marriage and are fighting to end Kentucky’s discriminatory laws so that their family can finally be fully protected.

Of their more than three decade-long relationship, their daughter Bella said, You guys belong together because no one else is going to laugh at your jokes other than yourselves.” Having already built a life of love and laughter, the family just wants to ensure that they have the legal protections in their home state that will give them security as they grow older.