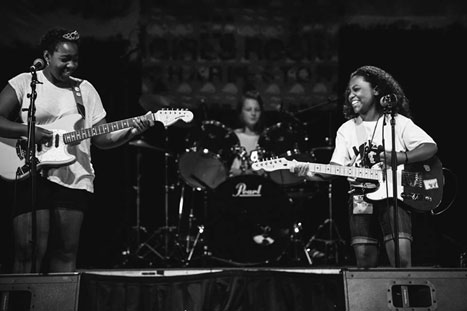 ​Girls Rock Charleston is a nonprofit organization that provides mentorship, music and arts education, and leadership development to young people in Charleston. Girls Rock operates an afterschool program serving at-risk youth and youth who have been involved in the criminal justice system. LEARN MORE

The goals of the program are to interrupt involvement with the juvenile justice system and to support a youth-led movement for social change. Several Girls Rock members have been adjudicated delinquent on charges of disturbing schools.

K.B., 15, a Latina student from Charleston and a member of Girls Rock, was charged with disturbing schools after she got upset over having to pick up a tardy slip when she was late for gym class. Because her complaints drew the attention of others in the hallway, she was thrown to the ground, handcuffed, and arrested.

D.D., an African American student in Charleston who has struggled with homelessness and who participates in Girls Rock, was charged with disturbing schools after talking to another student after she was sent out of class. She has subsequently spent two years languishing in a computer-based education program that is not designed to lead to a high school diploma.