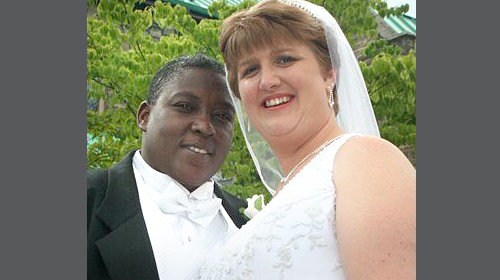 Fredia, 49, drives a truck for the Pittsburgh Post-Gazette and is a member of the Teamsters. Lynn, 43, is a pediatric nurse. They met 22 years ago when Fredia was driving a Greyhound bus and Lynn was a passenger. It was a new route for Fredia, and Lynn tried to help out with directions. They dated via Greyhound for five months, and then Fredia moved from Washington, DC to Pittsburgh to be with Lynn. They’ve been together ever since.

Their family includes Lynn’s daughter, Ashley, now 25, who lived with the couple from the time she was two years old. They also cared for two nephews and a niece after Fredia’s sister died. Caregivers by nature, they’ve long been known in their neighborhood as the couple to go to when there are people in need of care. They cared for two children in the neighborhood when their families were going through difficult times. And an elderly family friend of Lynn’s lived with Fredia and Lynn, who took care of her for 16 years until she passed away.

Because they cannot be married, Lynn had to go without health insurance for nearly three years because her job did not offer health benefits, and Fredia could not add Lynn to her employee health plan. During this time, Lynn suffered an injury and they were hit with thousands of dollars in medical bills. The inability to marry also prevented Lynn from learning the circumstances of Fredia’s emergency surgery and caused Fredia to wake up after surgery all alone, without any family at her bedside because Lynn was not considered a family member. The couple now “won’t leave home” without powers of attorney.

Fredia and Lynn feel that the exclusion from marriage stigmatizes them and other lesbian and gay couples by sending the message that they are not entitled to the same respect that other couples enjoy. As an interracial couple, Fredia and Lynn are aware that there was a time not that long ago when they could have been barred from marrying based on their races. As an African American who grew up in the South and went to a segregated school until third grade, Fredia has experienced the profound social and dignitary harms that come with discrimination. She and Lynn pray that they will soon be permitted to marry in the state that they love and that is their home and be treated here as full and equal citizens.