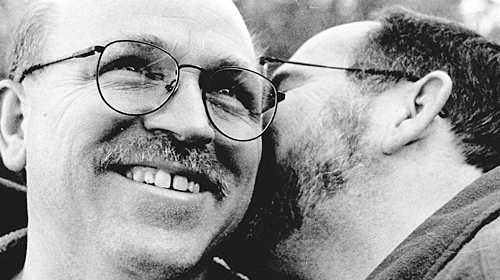 Born and bred Pennsylvanians, Ed, 67, grew up near Pittsburgh and David, 65, grew up outside of Wilkes-Barre in Trucksville. They’ve been together for almost 25 years and are planning a big party to celebrate their silver anniversary next month. Ed is a veteran of the U.S. Navy who served in Vietnam and, after that, spent most of his career at the Department of Veterans Affairs. David was director of exhibitions at a museum. When Ed was offered early retirement in 1996, they opened a bed and breakfast in Bangor. The couple retired “for real” five years ago.

Ed and David got married on May 10, 2013 in Maine. Ed’s 90-year-old aunt was the flower girl. They would have preferred to marry in their home state of Pennsylvania, where more of their friends and family could have joined in their celebration, but after 25 years together, they did not want to wait any longer to marry. And, as seniors, they worried that they might not live to see the day when they could marry at in their home state of Pennsylvania.

Financial burdens caused by Pennsylvania’s refusal to acknowledge their marriage weigh on Ed and David as well. Like many seniors on fixed incomes, they are concerned about managing financially in their retirement. They’ve even talked about moving to another state where their marriage would be recognized and they would have more financial security. But David said, “We don’t want to leave our home and community. This is where we met 25 years ago, and this is where we want to grow old together.”