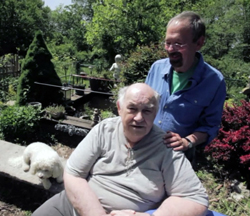 Walk into the home that Ed Hamilton and Gary Magruder have shared (in fact, built together) in Plainfield, and one easily spots their shared passion. The walls of the home are filled with art work that Gary painted. One entire room is given over to a massive compact disc collection of music and a large piano. Books can be found everywhere. The home has an easy, comfortable feeling of things being settled, peaceful.

It should. Gary and Ed have been together for more than 48 years – without interruption.

They met at the party of a mutual friend in 1964 and began what Gary describes gleefully as a “courtship.” Gary grew up in Kankakee County and spent time on his grandparents’ farm as a youth, so he was impressed when Ed took him to the theater and to the opera. After a few months, they found an apartment together and remained inseparable.

Both Ed and Gary are retired educators, and both still love teaching and sharing their knowledge with others. During many of their years, they describe the difficulty of living almost “double” lives – one at school where they never talked about their relationship (they taught at different schools) and the other at home.

At the urging of friends, Gary and Ed travelled to Canada in January of 2004 – on the 40th anniversary of their meeting – to be married. Gary smiles in telling about saving the lapel flowers from the wedding. They want their marriage, which is the pinnacle of their nearly half century relationship, to be recognized in Illinois.

After civil unions were adopted in Illinois, they went to the Will County courthouse to get a civil union (not realizing that their marriage already qualified them as having a civil union in Illinois). Ed and Gary were struck by the differences in the experience between their wedding and the perfunctory nature of getting a civil union. The clerk at the Will County courthouse acted as if they were getting “a fishing license.” That struck Gary, especially, as being different from how they felt at their wedding.

Ed, almost 75, and Gary, nearly 70, recognize that having their marriage recognized will help insure that they are able to care for each other through the duration of their life and protect the remaining spouse after one passes on.

Most of all, they simply want to spend their “golden years” recognized as married in Illinois. After 50 years, it is “about time” they say.