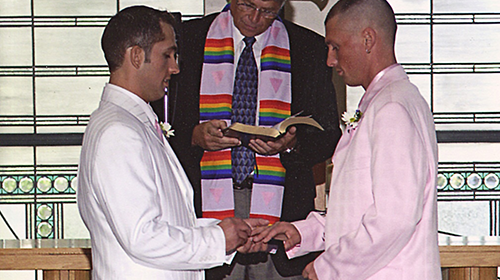 In the fall of 2004, Dominique James and Maurice Blanchard met each other at a cookout and they have been together ever since. After dating for a year, Maurice proposed to Dominique on a trip to New Orleans. On June 3rd, 2006, the couple was married in a religious ceremony. Knowing they couldn’t be legally married in Kentucky, both men still wanted to be married in the church because of their deep spiritual beliefs.

In 2013, Dominique and Rev. Blanchard sought a marriage license but were denied because of Kentucky’s discriminatory marriage bans. On the day they were denied a marriage license, Rev. Blanchard explained, “We can no longer be silent accomplices to our own discrimination.” They are bringing their fight to the Supreme Court in the hopes that the Court will rule in favor of equality so that they and their fellow gay and lesbian Kentuckians can have the freedom to marry at home.