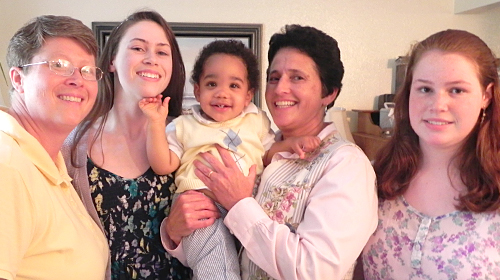 Together for 22 years, Deb, a stay-at-home mom, and Susan, an executive at BNY Mellon, live in Bridgeville with their three children, two dogs, one cat, and two tanks full of fish.

Deb, who is 45, and Susan, 49, have two daughters, 16-year-old Abbey and Katie, who is about to turn 15. They also have a two-year-old son, Landon, whom they adopted from the foster care system in November 2012. Deb and Susan’s lives are centered around their children. Deb has been active in the PTA and served as the “classroom mom,” planning class parties and chaperoning field trips. Susan has coached the girls’ volleyball and softball teams.

Faith is very important to the whole Whitewood family and they’re all heavily involved in their church. Deb is the president of the Altar Guild and the girls sing in the church choir. Deb told us, “Susan and I feel that we are enormously blessed to have found each other. We each had the same goals in life, and continue to do so.”

Deb and Susan had a Holy Union ceremony at their church in 1993 but would like to be able to be married and recognized as a married couple in their home state.

Abbey and Katie grew up assuming their moms were married. As they got older and came to learn that their parents were not allowed to marry in Pennsylvania, both girls felt that this was unfair to the whole family. They know they are a family and want to be legally recognized as one. The girls are also plaintiffs in the case because they feel their family should have the same protections and respect as other families.