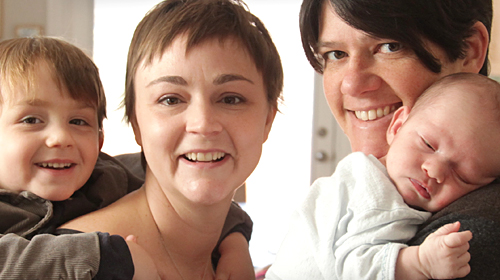 Dawn and Diana met on a study abroad trip and bonded over their shared commitment to social justice. They have now been together for 13 years. Dawn, 36, works for an anti-poverty organization. Diana, 37, recently finished her Ph.D. and does research on improving the Pennsylvania economy for working people.

A Pennsylvania native, Dawn grew up in Camp Hill and most of her family is in the area; Diana grew up in Alexandria, Virginia. They fell in love with Pittsburgh and decided to settle down there after visiting Dawn’s brother and his family several times over the years.

Dawn and Diana had a commitment ceremony in front of friends and family in 2007. But they also want to be legally married, in part because they want the same respect other couples enjoy. “Every time we have to check the ‘single’ box on a form, it feels like a slap in the face,” said Dawn.

Dawn and Diana have a five-year-old son named Elijah and a seven-month-old baby boy named Jude. They’ve completed a second parent adoption for Elijah and plan to do the same for Jude but first need to save up enough money to cover the expenses. Until then, they feel vulnerable because if anything were to happen to Diana, Jude has no legal tie to Dawn. If they were legally married in Pennsylvania, this would not be the case because both spouses would be recognized as parents from the moment of birth.

Elijah is beginning to understand what marriage is. He asks a lot of questions, and they struggle to come up with a way to explain to him why his parents aren’t allowed to get legally married. Diana said, “It’s gotten so complicated to try to explain to Elijah why we can’t do this basic thing other families get to do.”