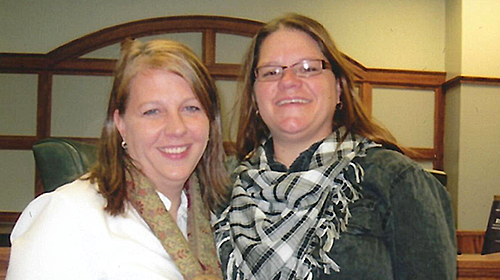 Crystal Von Kampen spent several years of her life in the Navy as a Hospital Corpsman. While deployed in Iraq with the Marine Corp, she says she “saw things no one should have to.” Now that she has been honorably discharged and is living with PTSD, she wants her wife, Carla, and their family to have a basic sense of security other military veterans and their families have.

Crystal, 35, and Carla Morris-Von Kampen, 40, have spent most of their lives in the town of Norfolk. They have been together for five years and celebrated their one year marriage anniversary at the beginning of November.

Carla recently decided on a career change. She went from owning her own business to working as a family advocate for a non-profit specializing in families with children that have emotional and mental disabilities. Carla has two adult children from a previous relationship. After meeting Crystal, Carla’s son became inspired to join the military and Carla’s daughter is a junior majoring in Exercise Science at Wayne State College.

The couple and their children can benefit from medical insurance and use of military base facilities. This is because the federal Veterans Administration recognizes their marriage. However, there are several areas where the VA either relies upon state law or where the state is providing a benefit to a veteran’s family. A few of these areas are creating incredible difficulties for the family.

Crystal and Carla put in a joint application for a VA home loan that would cover the loan and down payment on the family’s new home. On the eve of closing, the state VA administration office said the couple is not considered legally married in Nebraska and a loan from the VA was denied. The couple scrambled to secure a down payment from family members, costing them $11,000 that a Veteran who wasn’t gay or lesbian wouldn’t have to pay.

Carla’s daughter does not get the tuition benefit afforded to other children with a disabled veteran as a parent or step-parent. Through student loans, a Pell grant and a Chapter 35 GI Bill which is a federal program, Carla’s daughter has made things work. She has to pay $5,600 a year for tuition that she would not have to pay if her mom’s marriage was recognized.

“Because of what I gave for my country, I am now disabled. My wife and the family we’ve created are facing challenges because Nebraska doesn’t recognize our marriage. The families of all veterans need to be honored, no matter what state we call home.” — Crystal