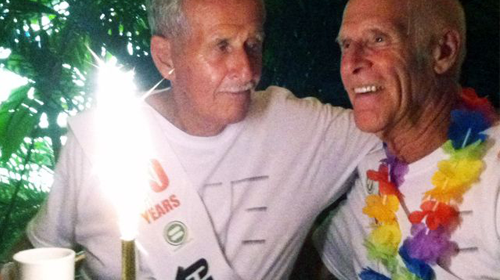 Chuck Hunziger and Bob Collier have been together for over 50 years and currently live in Fort Lauderdale, Florida. Bob is 79 years old, and Chuck is 81 years old. Bob served as a Captain in the U.S. Army in the medical corps in the 82nd Airborne Division and Special Forces during the Vietnam War.

Chuck is a disabled veteran; he served as an enlisted man in the Navy during the Korean War and spent 18 months in a Naval and VA hospitals. For most of their professional lives, Bob and Chuck worked in New York, Chuck for Mobil Corporation and Bob for MetLife, Inc. Having retired in Florida, they are now involved in local charities, including Tuesday’s Angels, which provides emergency assistance to individuals living with HIV/AIDS. They were married in New York in July of 2013.