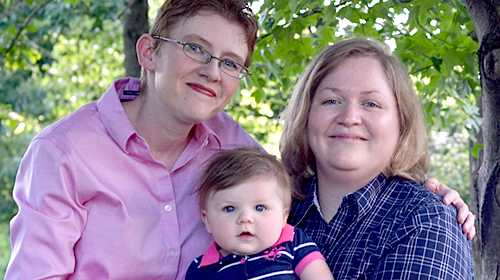 Christy and Victoria, both 34, were living in Ohio when they met online in 2004. Christy, a veteran of the U.S. Air Force, was a contractor for NASA. Victoria was working on her master’s degree. “As soon as I met Christy I never looked back,” said Victoria “And we’ve been together for nine years now, so I think it was the right decision!”

They moved to Northern Virginia in 2005 mainly for the career opportunities that living near D.C. provided, but then fell in love with the community. Victoria is passionate about volunteering in her community, and she has supported charitable causes such as the Taproot Foundation, the USO, and the United Way. Additionally, she is an active member of a local civic club that raises tens of thousands of dollars annually for local charities and causes. Christy helps out as well. “If it’s on the weekend, I get recruited to help out with all of Victoria’s volunteer work,” Christy told us.

Christy has worked for the Department of Justice in information technology for several years. Victoria runs a home-based business doing career coaching and resume writing, which allows her time to also be stay-at-home-mom to the couple’s eight-month-old daughter Lydia. Christy gave birth to her, and Victoria is legal co-custodian, a designation they had to hire a lawyer and go to court to obtain. However, this designation does not make Victoria a legal parent, and they worry about whether it will be respected in medical emergencies.

Christy and Victoria had an upsetting incident at the hospital when Lydia was born. When they where moved into a room after the delivery, the nurse who was on duty overnight and who was assigned to see to Christy’s care clearly had an objection to serving a same-sex couple. In every interaction, the nurse was overtly rude and condescending. After a while, the new mothers felt that they were more or less “on their own,” leaving Victoria to care for Christy and their newborn without the support of the nurse. They feel certain that a heterosexual married couple would have been treated much better.

They got married on August 20, 2011 in Washington, D.C. Victoria said, “I wanted that legitimacy. I wanted to stand before my friends and family and pledge my life to Christy.” The couple is taking part in this case in the hopes their marriage can be recognized in the state in which they plan to raise Lydia and grow old together.