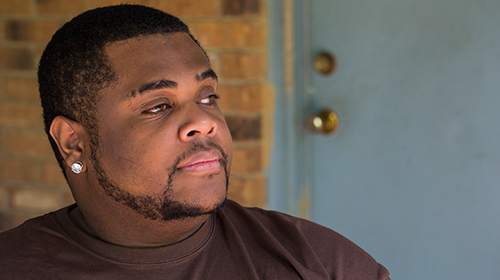 On a typical day at EMCF, Christopher woke up at 6 A.M. and tried to make his way through the next 16 hours without getting beaten or robbed. The task is made harder because For years, Christopher was denied the eye drops he had used all his life. His sight got progressively worse, and he was in constant pain from the pressure on his eyes. Christopher says he paid prisoners to help him fill out medical forms requesting an appointment with a glaucoma specialist. Not only did he never see a specialist, but at one point the prison stopped giving him any medication at all because the corporation running the prison at the time refused to provide anything but life-saving medication. So he sat alone in his unlit cell – the light bulbs had been taken out and the sink hanging off the wall – listening to the radio day after day; his worsening sight made him a target of abuse by guards and fellow prisoners.

For years, officials at EMCF kept Christopher among the general prison population rather than placing him in a safer section for disabled prisoners. He paid for protection, but the prisoners took his money and did little to help him. He told guards of the constant theft, and the guards ratted him out to perpetrators. Sometimes the guards made the prisoners come out of the cells and then locked the doors behind them. Christopher reports that when he was locked out of his cell, he did not have any protection from abuse. “You just getting beat up out there on the floor while [other prisoners] take you, drag you in the shower and beat you.” All that kept Christopher going his five years at EMCF was “knowing my little girls are out there waiting on me to come home. A lot of things I want to do with them, see them grow up, play at school and get that first boyfriend, learn how to drive, ride bikes, graduate from high school, get married and go to college. All that stuff.”