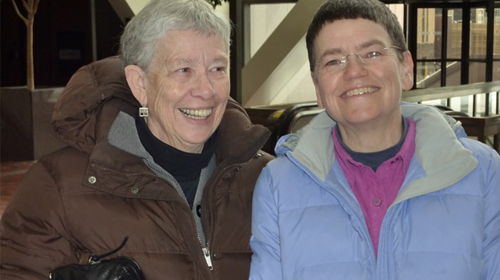 Eau Claire. Carol, 60, and Virginia, 74, both grew up in Kansas and moved to Wisconsin together in 1977. Carol worked as an elections administrator and city clerk, and is now retired. Virginia is a retired Unitarian Universalist minister and also a professor emeritus of English at The University of Wisconsin-Stout, where she worked 24 years. They live in Eau Claire with their border collie/Australian shepherd mix, Z.

Carol and Virginia have been together 38 years, since their very first date in 1975. They were the first couple to join the Eau Claire domestic partner registry in 2009, and got married on their anniversary in December by a judge in Minnesota. As Virginia puts it, “We’ve been inching towards matrimony for 38 years!”

Carol and Virginia raised a son and daughter together – Virginia’s children from a previous relationship – and now have four grandchildren. Their granddaughters in particular very much want their marriage to be recognized in Wisconsin. Recently Carol and Virginia took Samantha, 16, and Megan, 13, to a friend’s wedding in Minneapolis, which Virginia officiated.

“They were really moved and talked a lot about it afterward,” Carol says. “It’s important to them that their grandmothers’ love is recognized in Wisconsin through marriage.”

Carol and Virginia routinely have been denied benefits afforded to legally married couples. While Carol worked for the City of Eau Claire, she was denied family medical leave many times when Virginia had surgeries, illnesses and injuries. They’ve even been denied a family membership at a local health club.

“The protections and benefits we’re missing out on are still really important to us,” Virginia says.

Carol adds: “The main reason I want to marry Virginia is that it would be an affirmation of our relationship and our family.”