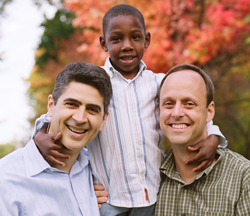 On a quiet side street in Evanston, Carlos Briones and Richard Rykhus live with their 7-year-old son Ty’rith (Ty). A couple for eleven years, Richard and Carlos held a commitment ceremony for 120 family and friends in July 2005. “We wanted to tell the world that we are committed to one another,” says Carlos. “It was important to make a statement that our love was permanent, lasting.”

During a visit to Richard’s parents a few months later, Carlos and Richard were married in Canada. Now, they make a point of calling one another “husband.”

“I think it is crucial for me to identify Carlos as my husband,” says Richard. “The word ‘partner’ never has worked for me – it sounds so transactional. We are not in a business relationship. We are in a life-long committed relationship.”

Carlos, who teaches philosophy at a local college, says that early in each semester, he lets his students know that he is married. Still, Carlos says, “I find that I have to force myself to use the word ‘husband’ to describe Richard. It is not that I don’t think of him as my husband. But I always feel that I have to add an explanation that we were married in Canada, and the marriage isn’t recognized in Illinois. That seems wrong.”

Richard was reminded that his marriage isn’t recognized recently when he found himself in a hospital emergency room. Even after he told her that Carlos and he were married, a nurse wrote Carlos’ name on Richard’s wristband as “partner.” Although in pain, Richard stopped the nurse and insisted that she write “husband.”

“It may seem like a small thing,” Richard adds. “It is not. I want my love and my relationship to be acknowledged and respected.”

Carlos and Richard share a love of education. Recently, Richard saw that he could make a difference in the local elementary schools by running for the local school board. He was elected, and now finds the work to be rewarding and fulfilling. His position also gives the entire family a chance to give back to the community.

Richard and Carlos want their marriage recognized – especially as their son Ty matures. Carlos says that occasionally they will ask Ty what he wants to do when he grows up. Inevitably, like many 7-year-olds, Ty reports that he wants to marry the latest female pop singer. “That is normal,” says Carlos. “We grow up wanting to marry the person we love. For me that is Richard.”