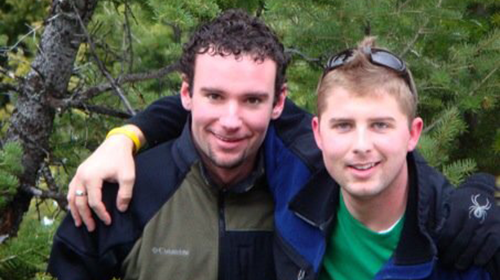 They have been committed to one another since meeting at a mutual friend’s barbecue in 2007. In 2011 they entered into a civil union in Chicago, and they were married on the Big Island of Hawaii in January 2014. Same-sex marriages were so new to Hawaii that the courts available to perform them were limited. The juvenile drug court judge presided over Chase and Ben’s wedding – one of the judge’s first – in front of a contingent of excited court staff, who lined up and clapped for the couple after their nuptials.

Ben said he knew they belonged together forever when, “something switched in my head. ‘Me’ became ‘We.’” Now they want their marriage to be recognized in Montana, their home. “I feel like I’m being punished for my love,” says Chase.

Ben, 30, was born and raised in Minnesota but spent summers and winters with his mom in Montana. Ben attended the University of Wisconsin Whitewater and then moved to Bozeman in 2006 and works for a Chicago-based marketing firm. Chase, 29, was born in Great Falls and graduated from high school in Charlo. He attended Montana State University and has worked for Costco for the past 10 years where he is now a member of management.

The couple enjoys hiking, camping, great food and travel. They can’t imagine life without each other. “We just click,” says Chase. “To this day I’m always excited to come home to him.”