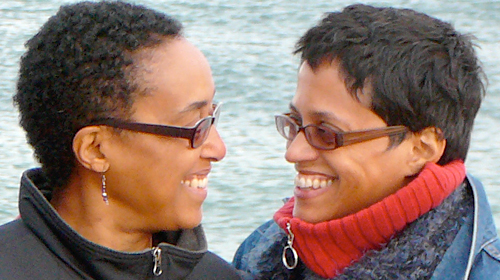 Angela and Gail have lived together for 17 years. Angela, 60, is a clinical psychologist and professor at Arcadia University, and Gail, 55, is a filmmaker and visual artist who graduated from Temple University’s Film and Media Arts Program. They practice Buddhism and meditation together.

After they met at a mutual friend’s party, Angela couldn’t get Gail out of her mind. Two years later they ran into each other at a book signing and have been together ever since. Angela told us, “After 17 years together, we both feel so lucky to have found one another. We are both amazed that we can’t think of anyone else that we enjoy spending time with more than each other.”

Angela and Gail are registered domestic partners in Philadelphia. They would like to get married and be recognized as a married couple in their home state because they love each other and want the chance to stand up and have their family and community witness them make the fullest commitment two people can make to one another. They also want the security that comes with marriage.

Gail and Angela bought their house together 15 years ago. It was a fixer-upper, and they both invested money and time to renovating the property. Because they cannot marry in Pennsylvania, when one of them passes away, the other one will have to pay inheritance tax on the home they built together.

Moreover, because Angela is the primary breadwinner and Gail, as an artist, doesn’t draw a steady paycheck to contribute to Social Security, the couple fears for Gail’s economic security should Angela be the first of them to pass away.